Poem of the Day: “Moments After Murrah” by Catherine Katey Johnson

Songs of Eretz Poetry Review is pleased to present “Moments After Murrah” by Catherine Katey Johnson.  Johnson received her Bachelor of Science from the University of Central Oklahoma and her Associates in Arts from Rose State College, and is retired from the Professional Development Department of the Oklahoma State Department of Education. She also worked for two years with the Kaizen Heron Group, Universal City, California, as part of their creative development team and as a staff writer.

Johnson is the author of a non-fiction book, Pody Poe, from Tinhorn Gambler to Kingpin of Organized Crime (Grant-Books, LTD., 2005). Her poems have appeared in The Long Islander and New Plains Review, as well as in several anthologies.  She won “Most Entertaining Poet” at the Oklahoma State Fair this year and does readings throughout central Oklahoma and Tulsa.  Follow her at   https://www.facebook.com/catherine.k.johnson.98?fref=ts.

Violence reclaims our days.
My wedding anniversary,
a time of something old and borrowed,
then something new blew up
a bellows in my ears, doors blew open
in our place, fifteen miles away.

Moments after Murrah's dark fog lifted
standing there were the south and west two-thirds of it
and a hole, a hand-blown bowl of dust,
debris and truck parts raining
for three blocks,
fiery foreign cars,
two hundred buildings that used to have windows to--
LOOK OUT!--
My friend was minutes late to work and alive
While co-workers joined the others
whose time cards held nine, oh, two--
punched out by the dozens
sent to bits by a Ryder.

If you had only parked there this morning,
or we had all circled it
with our Wagoneers, Escorts and Mavericks;
if others had parked there instead,
to attend the free government
sponsored seminars about pensions,
or how to buy a license to deal
arms
and legs
hands
in the concrete
pancaked over day care
Social Security,
Customs,
Housing, Urban Development
nearly five on the Richter, 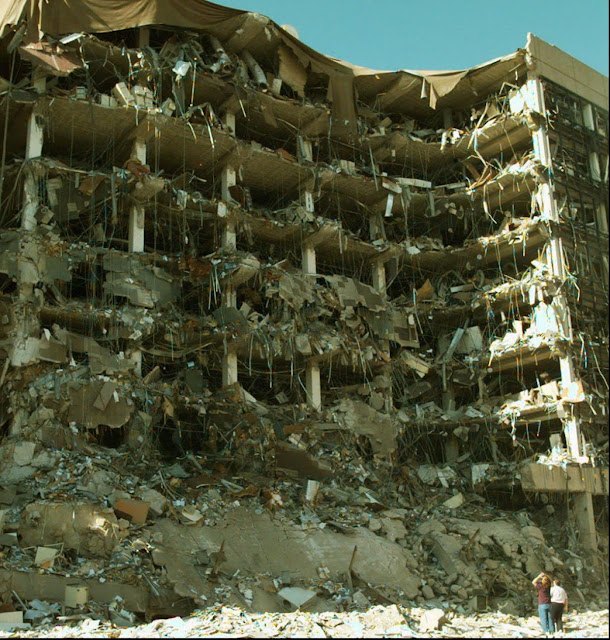 Poet’s Notes:  When the Alfred P. Murrah Building was bombed, more than 200 buildings were severely damaged, 168 people were killed, and hundreds more people were physically and/or psychologically wounded. The whole city rallied to help. I had training in how to conduct victim/survivor interviews and I put that training to use.  In the weeks following, I was witness to or heard first hand of the magnitude of the disaster.

Editor’s Note:  “Moments After Murrah” was first published in The Heart’s Journey (Village Books Press, 2009).
Posted by Steven Wittenberg Gordon, MD at 8:21 AM