Poem of the Day: “Abandoned Garden” by Ellaraine Lockie, Poet of the Week

Songs of Eretz Poetry Review is pleased to present “Abandoned Garden” by Ellaraine Lockie, Poet of the Week.  A brief bio of Lockie may be found here: http://eretzsongs.blogspot.com/2015/11/poet-of-week-ellaraine-lockie.html.

The house now as much a ghost as she
Yet she lingers in these immigrant flowers
that survive encroachment from native clover
blue flax, sage and morning glory
Butterflies that pollinate from one to the other
arbitrating the struggle
Like the diplomacy of a woman
caught between a hardcore German husband
and the America around them
Between their children and the razor strop
that hung on a toolshed door 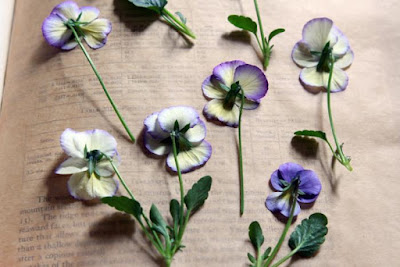 of hailed-out crops, drought and grasshoppers
Today the prairie breeze breathes the same scent
as her heirloom handkerchiefs
The sweet violet toilet water sacheted in drawers
and splashed on after a well water wash

She lives in the pressed purple yellow
pansies that look out from
a grandmother's diary and recipe books
Butterflies, as they take flight
in the draft of turning pages

Poet’s Notes:  “Abandoned Garden” is a composite poem in that it is the result of multiple experiences and observations.  The initial idea came from a San Francisco museum drawing on crinkled handmade paper of a partially cracked and broken vase lying on its side out of which pansies spilled.  The flowers were drawn progressively into butterflies that eventually flew away from the vase.  I took a photograph of it and carried the image around knowing I would write about it.  I put pen to paper every few days but couldn’t get beyond the first four lines of the poem.

Months later I read a newspaper article by Robert Lucke, Editor of my Montana hometown newspaper, the Mountaineer, about his grandmother’s prairie garden, and I knew where I’d go with the poem--to my own grandmothers’ gardens.  Both were homesteaders, and some of my aunts and uncles had descendent plants from their mothers’ gardens.  With these thoughts and images, I wrote the middle section of the poem.  The last stanza came from the pressed flowers that are still in the books I have which belonged to my grandmothers.

Editor’s Note:  I particularly enjoy the way Lockie metaphorically ties the lady to the land, as well as her use of words that evoke the senses.  “Abandoned Garden” was first published in The Bookwoman.
Posted by Steven Wittenberg Gordon, MD at 10:04 AM