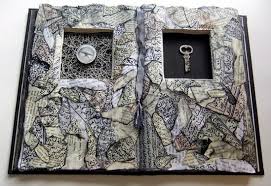 "What's Left (Al-Mutanabbi Street)" by Katrina Roberts was offered by Poets.org's Poem-A-Day on August 29, 2013.  The piece is divided into several parts.

The first section, entitled "Tracery," lists a litany of things that the poet is not or perhaps that the world is not.  Image jumps to image.

In the second section, entitled "Stitch," feelings of uselessness, idleness, and imprisonment are evoked.

The third section, entitled "Resist," provokes a feeling of longing, an itch that cannot be scratched.  Again, there is swift movement from image to image.

In the final section, entitled "Scar," a surreal journey is described which is at first horrifying, then confusing, and at last hopeful.
Posted by Steven Wittenberg Gordon, MD at 7:45 PM