"My Journey with John" by the Editor 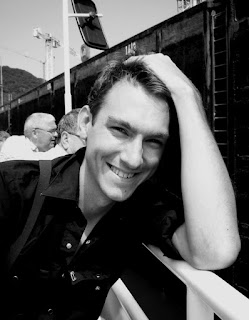 I have been aware of the speculative poetry of John Reinhart ever since I became aware of the self-styled Science Fiction Poetry Association.  That would have been late in the year 2012.  At that time, his work appeared frequently in the SFPA journal Star*Line, edited until recently by F. J. Bergmann.  I found (and still find) his genre poetry to be engaging and thought-provoking with a sprinkling of (at times dark) humor worthy of a smile albeit sometimes a grim one.

I launched Songs of Eretz Poetry Review in 2014 and published some of John’s more mainstream poems with such frequency that I eventually invited him to be a Frequent Contributor, a quasi-staff poet position, which he held from the inception of the FC program in January 2016 until he decided to move on to other projects in December 2017.  During his time as an FC, I published approximately thirty-five of his poems, easily enough for a chapbook or small collection.

Of all John’s poems that appeared during his time as an FC, the most popular with the Songs of Eretz readership were “24th century lullaby” http://www.songsoferetz.com/2017/03/24th-century-lullaby-by-john-reinhart.html and “saying goodnight” http://www.songsoferetz.com/2016/09/saying-goodnight-by-john-reinhart.html.  The latter is a mainstream poem of only twenty-six words that exemplifies John’s love of family, storytelling, and science fiction.  (There is always a speculative element in one of John’s poems--one just needs to look for it.)  In this poem, John melds heart and ear to form a “heart ear.”  What a weird yet beautiful concept!

In the former poem, John demonstrates his enjoyment for composing form poems, this time using the empat perkataan form.  Setting aside the obvious sci-fi title, the poem, while certainly speculative, harkens back to balladic nursery rhymes and old household tales, a joining of the familiar with the cosmic.

The last collection of John’s poems that I read was Invert the Helix.  Disappointingly, only half a dozen poems in the collection really moved me, two of which I had previously published in Songs of Eretz.  The rest of the poems in the collection I found either too "out there," borderline non-sequitur, experimental (but not in a good way), or too cutesy for my personal taste.  Nevertheless, I admire John for taking a risk.  After all, if poets never did, poems would still be imprisoned in stifling forms and entirely dependent on rhyme and meter.  And that would be a shame.  I will continue to follow John’s poetry career with great interest.  You should, too.