Songs of Eretz Poetry Review is pleased to present “Le suicide” by Ashley Valente in her publishing debut.  Valente has honed her craft through years of study at the University of La Verne.  She specializes in short stories and poems and is a classic film buff.

on the wrist
where there est non vermillion mouth

to call you mad

in your
own villa

drips into your eyes
blind to everything but 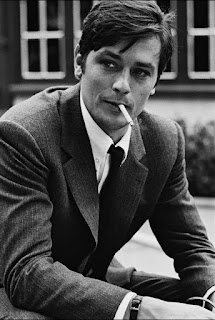 Poet's Notes:  The 1967 film Diaboliquement Votre inspired “Le suicide”. An amnesiac, played by international sex symbol Alain Delon (pictured), is being systematically brainwashed by his supposed wife and best friend, who are both urging him toward suicide. The left oriented stanzas touch on sex as an addiction, the right oriented stanza on monetary greed, before the two sides converge in the final stanza. In addition, the left oriented stanzas may be read together as a stand-alone poem.