Songs of Eretz Poetry Review is pleased to present “Absolution” by Linda Carney-Goodrich.  A lifelong Bostonian, Carney-Goodrich is writer and teacher whose poems have been winners in the Boston Mayor’s Poetry Contest in 2014, 2016, and 2017. Her poems “Dot Girl” and “Vodka, Beer and Cigarettes” were published in the July 2017 anthology City of Notions: An Anthology of Contemporary Boston Poems. Her poems have also appeared in Omnivore, Spare Change, Survival News, and in a chapbook of the Jamaica Pond Poets entitled This Great Gift.

Carney-Goodrich has created and performed several one-person shows, including The Secret Childhood Diary of a Welfare Mother, and My Life in Barbie. She has taught writing to a wide range of people, including youth in foster care, women on welfare, and youth in mental health and rehab facilities. She currently teaches all aspects of writing to small groups of homeschoolers in the Greater Boston area through her business, Home Scholars of Boston. 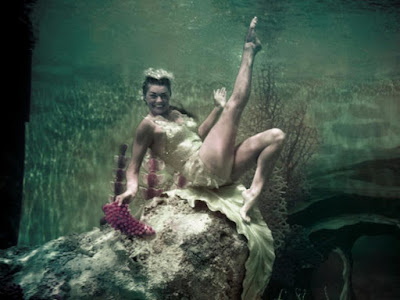 You and Esther Williams
Playing beach ball in heaven.
She in an emerald green, skirted, bombshell bathing suit.
You in the $250 outfit I bought that day I hoped
You'd impress the boss and earn a good living.
See her golden smile?
Her unfurled legs?
Her eyes flash like a movie projector.
She knows your story.
Strip down.
Dive for sea stars together.
Bathe in her loveliness.
Do not let your feet
Touch land.

Poet’s Notes:  Absolution is a poem about forgiveness. It is about wishing the best for someone who may have harmed you. It is about letting go and choosing love. Esther Williams and the man in the poem died within a month of each other. I had a clear vision of them on the beach happy and playing. He was no longer in any pain--mental or physical. She was gorgeous, and he was dapper. They were shining. And I wanted it to be so. And I forgave, and there was peace.

Editor’s Note:  This refreshingly modern take on the usually cliché love sonnet is simply mind-blowing!  The idea that a widow would grant "absolution" to her dead husband, allowing him an affair with one off of his "freebie list," astounds.  I happen to be a fan of Esther Williams (pictured), but, even if a reader has never heard of her, the poem easily makes its point.
Posted by Steven Wittenberg Gordon, MD at 9:06 AM