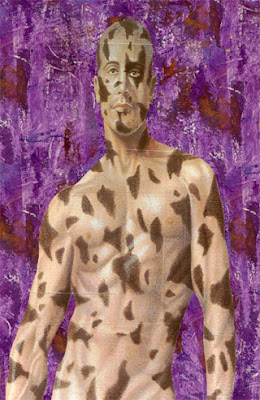 Though human he was born with blots
Like permanent leopard print
Eyes scrunched, brows furrowed, sweat immune
Words and stones were thrown from fear, hate

Tears bit back, he took to the trees
Shadows hugged him; light kissed his flesh
Thus he fell to Nature's embrace
A home gained, a place he felt free
Still not quitting humanity

Poet's Notes: This is another poem that came about by considering nature's marvels. Watching a wildlife program featuring cheetahs made me come up with a human character with spots. I wanted a realistic tone; with people either fearing or despising said character. The ending came as a surprise even for me. I had the idea to make this completely tragic, but an almost optimistic last line sprung up instead. I'm actually glad it turned out like this.

Editor’s Note:  Taken literally, this poem has an interesting speculative narrative.  Metaphorically, the poem could be interpreted to represent the victims of bullies and anyone else who does not quite fit into society.
Posted by Steven Wittenberg Gordon, MD at 4:21 PM