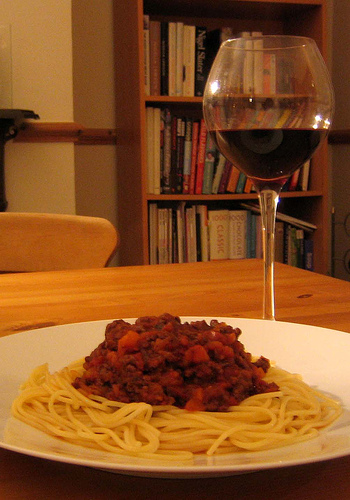 A deep and early memory
I can recall it vividly:
The darkness of the night
Robbing the transparency of the window
So that our own figures
Reflected when we gazed without
The pine table
Rustic and antique
Set for supper, spaghetti
And my father's glass of wine

Poet’s Notes:  This poem is written in dedication to my father, William John Rowe, who died in January 2017 from cancer. It recalls my second oldest memory of him, which came to mind when I realized I am still not much of a red wine drinker at all.

The poem is divided into two stanzas of ten verses a piece with one verse standing alone to underscore my retained distaste of wine. I wrote this poem rather quickly after I had breakfast one morning and I struggled only with how to describe the exact taste of the red wine. I settled at last on “silten”, as I think the taste of a dry red wine conjures up a deep, earthy taste. It is, as best as I can remember, an accurate description of the wine I actually tasted so many years ago.

My favorite two verses in the poem are the conclusion of the first stanza:  "Set for supper, spaghetti / and my father's glass of wine". I believe this is the only time I've ever referenced my father in anything I've ever written in such a direct manner and I thought it reflected well my desire to do something to mark his death. I also like the alliteration in the first of those verses, which I find pairs well with the second verse.
Posted by Steven Wittenberg Gordon, MD at 7:57 PM