Poet's Notes:  About eight years ago, I embarked upon an unusual artistic project. I wanted to commit life in New York City to paper and I wanted to do it in an unprecedented way. I decided to write an epic poem with a complex underlying rhyme scheme. By harnessing the cumulative effects of highly ritualized, daily writing sessions, I completed my objective in about fourteen months. I assembled together an original literary world of eccentric citizens, towering structures, neon lights, and relentless rhymes. I disregarded formal meter, and focused entirely on character, story, and the power of experience.

“Trauma” is an excerpt from my epic poem. I recently revised it. The narrative here occurs within a dream sequence. In life, an individual’s chosen philosophy and ideology is largely indicative of the particular chaotic sliver that they happened to witness. It isn’t necessarily the logical product of searching thought. Objectively, the world is far too vast to be reduced to a standard, organized set of opinions or principles with any kind of ongoing accuracy. But the temptation is always there to formulate a cheat sheet and label it. People long for a belief system that will define their own experience. It is natural. Even atheists do this and in many instances they’re less aware of what they’re doing.

In “Trauma,” the poetic narrator is reflecting upon child abuse, and from there the dream segues into what is essentially a rhyming representation of Gaia theory http://www.gaiatheory.org/overview/. The narrator initially resists this apparent revelation and in fact he finds it terrifying, as reflected in the line “made body shudder and appalled heart pound.” However, the dream continues to unfold, and a mysterious voice insists that “Everything is One,” suggesting that perhaps the unity of Gaia theory could be instrumental in resolving the shattering effects of trauma. Thus, the narrator chooses a new philosophy for himself. 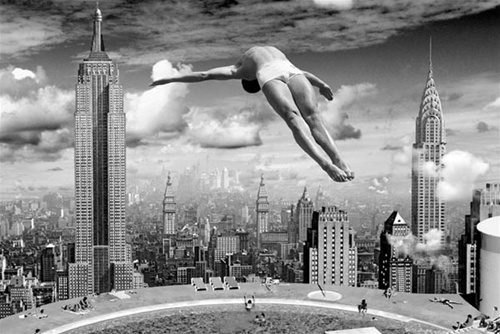 Faded footprints mixed with fresh ones in snow.
A skinny track curved along the sidewalk,
noting the path of a bike in its glow.
Indentations were filled by nature’s clock.
White specks fell in diagonal descent.
The blistering cold masked the city scent.

The day had been long, and taxing to suitors;
I had waited on a raised brown platform
in morning light, with huddling commuters.
We shifted and scuttled in the quick storm,
yet the morning seemed like ages ago
as I mailed a postcard in mounting snow.

I shopped in a bodega for lunch-meat.
As I left, I saw a timid stray cat.
I felt sympathy pulse from my heartbeat.
I gave it food and said, “Did you know that
we are born all day like beautiful beasts
as more of life is created for us?
We rarely rejoice in these little feasts.
We silently shun tiny souls and thus
forget to be commendable creatures.
As you and I roam these frigid wastelands,
and you retain your soft shape and features,
let’s cast aside all misinformed demands.
And let’s you and I like a lion roar!
The glory of existence offers more.”

I returned to my Brooklyn apartment
and condemned my piddling around as I
collapsed within the small white compartment,
loosened the half-Windsor knot of my tie,
stared at eclectic posters on the wall,
and let my feet dangle off the mattress.
Perception slowed, tired thoughts bent to crawl,
and pictures flowed into bleak abjectness.
My muscles twitched in a tiny room that
kept me enclosed as consciousness became
vague buzzing symbols in my mind’s great vat.
They blended together into the same
melted mess as my lids faintly fluttered
to clear my mind. But the room was cluttered.

I restlessly turned, thrashed, and sat upright.
I unbuttoned my secondhand wool coat,
clumsily fumbled around without sight.
In scarce strained hours to which I devote
nothing, I threw off my coat in a rage.
Slowly, chords of my subconscious seemed strung
by vibrations of the external stage,
uniting mind and Earth as sleep-bound one.

(They say a dream is a mere distortion
of life, showing us encrypted insight.
I think that life is the false contortion
of the fragmented dreams we have at night.
Could dark chaos deemed interpretation
be a brief, bright glimpse of liberation?)

I dreamt I was a boy, my soul aflame,
my barefoot feet fleeing my so-called home,
pattering away from abusive game
in suburbs filled with cardboard, Styrofoam,
plastic, metal, and conformist things.
I avoided rusty nails, broken glass,
ran by highways that reigned on maps like kings,
made it across a steel bridge, and alas,
I approached factories – an adult man.
But my ankles were suddenly shackled,
and this forced me to think I was less than,
shuffling along, prone to being tackled.
I walked on streets paved by struggling senses,
passing by barbed wire and chain-link fences.

I moved one foot ahead, then the other,
as always, but slower, more consciously,
as though for the first time near my mother.
I traversed grounds conspicuously
and became aware I was being led
by signs, streets, subtle mechanization,
slowing and steering me as my feet bled.

A billboard advertised a vacation.
Next to a fence, I let words unravel,
and said, “Their apathy stings worse than spite;
their precious beach is the ocean’s gravel.
Be persistent as a small wave with might!”
I noticed a red “beware of dog” sign,
and shuffled away, across the state line.

I knew where I had been, where I would go;
awareness resulted from measured pace,
and I understood what had caused my woe.
I noticed labels scrawled with nature’s grace ―
Never do signs read, “Beware of parent.”
It seemed my instinctive trust was abused
when I was bruised by ways most aberrant,
and so I’d wandered, skin healed, still confused,
completely lost in dreams of awful din.

Then my shackles vanished! I leapt in bounds,
without a mere scratch on my calloused skin!
I entered a tunnel, treading dark grounds.
Someone cried, “Must clocks melt for you to see
that this brightly layered accuracy
betrays the warped intent of time? Of dust,
you claim to be conceived, citing scripture,
knowing also you will return to dust,
denying the ever-present picture.”

I lit a match. The voice asked, “What flickers?
By flame you try to see the forsaken;
such is the way of boys who drink liquors
for bottled brawn! Let your heart awaken!
It wasn’t careless omission of sun,
But rather, man’s ingenuity
that made this long path of darkness, young one,
As seen in you who likes acuity.”
I could not spot a man or wrinkled sage,
yet from some spring flowed truths of ancient age.

“Oh wisdom lost, and out of shadows seized,
await the thief whose knees would not buckle
while carrying words; with me, be appeased!
Let me pass,” I said, with a clenched knuckle.
“I don’t know your face or your objective!”

The voice replied, “Are you fearless and free?”

I said, “I’m under my own directive!”
The voice boomed, “Where will you go, escapee?”
“To the city,” I said. It asked, “And then?”
“I will wander beneath sunlight,” I said.
The voice said, “A pilgrimage! Ah, amen.
To well-lit, concrete, towering homestead!
And once there, what simple thing will you do?”
I said, “Rehydrate. What is it to you?”

“You walk towards water!” declared the old voice.
“‘I am a free man, controlled by droplets!’
That is your battle cry. Well then, rejoice;
purge all pretensions from your silly wits,
for there is a wanting always speaking.
No man is free from the rest of the world.
Your pride evaporates with thirst peaking ―
it’s then that nature’s scripture gets unfurled.
The satiation of our wants and needs
determines the course of inclination.
In conjunction with Earth, we do our deeds,
never apart from our habitation.
You would not require parts of the Earth
if people and it weren’t of the same birth.”

With match in hand, I clung to rounded wall.
I hoped for beaming headlights. No cars passed.
With struggling courage, I began to call:
“Come here! Where are you, shadowed outcast?
Bring to light the precepts within your grasp.”

The voice said, “You hold the truth as I do,
for when your left hand and your right hand clasp,
there is an expectation within you
that pure opposites will meet and connect.
Fold your hands and in your palms find the Earth.
Know you are neither free nor a subject.
Your life contributes to the global worth:
For you are defined,
like fingers entwined.”

With scattered might, I shone my dying light
upon a self-eating snake on the ground:
swallowing its tail, this phantasmal sight
made body shudder and appalled heart pound.

The voice asked, “Why see such perversity
in holy Ouroboros, whose nature
is known by you and all diversity?
His snack is but a cosmic caricature.
Everything is One, but for that great one
to be eternal, we all must begin
and end, perpetually ― everyone.
The cosmos dies for everything therein;
such are the ways, seemingly uncaring,
of interconnectedness, unsparing.”

I ran down the tunnel, and the voice cried,
“You will hear me again, in waking life!”
I returned to light. Darkness quickly died.
But I heard the faint voice say, “Find your wife!
Feel the soft grace. Search through the gritty.
Bright eyes await you, in man’s big city!”

Then I awoke, my sheets in a jumble.
I calmed down, stretched my neck from side to side,
pulled apart the curtains, and felt humble
while watching flimsy bits of snow that glide
and fall in flight on crests of swerving air,
keeping triangular rooftops dusted.
A unifying force, for all to share ―
sprinkling cars with clumps of white encrusted
on hoods and windshields, and the black wires
once unnoticed while strung from wooden posts
starkly contrasted white skies that inspire
resplendence and cast away the morose,
Spreading bright magic as if in child’s prayer!
People seemed goofy. Others hid despair.
Posted by Steven Wittenberg Gordon, MD at 3:51 PM