Poem of the Day: “Twentieth Century Chinese History (Revised, Again)” by John Reinhart, Frequent Contributor and Poet of the Week 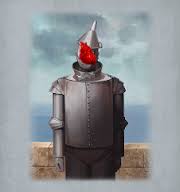 on the road
to becoming chair man.

His studies
inspired
the revolting culture
of the 1970s.

His little read book
fanned the flames
of incontinence,
arousing the people
as nothing else
since the Brutish
Idiom Wars.

Not everyone
supported Mao’s
Commonest Party
and many people
wanted to have their own
parties.

In China's
Tinman Square
one man
with a lot
of heart
stood
in front
of a tank.

Poet’s Notes:  I stand in front of high school students several hours a day. Sometimes they write me the most amazing and inspiring lines, many of which I had adapted for this poem. I actually think that one of my students believed Mao studied pheasants. It says a lot for nature studies that pheasants' behavior should have changed the course of a century.

The actual poem started with the tinman. Of his quartet, the tinman is most emblematic of our frozen society. While the atmosphere warms, our hearts cool. Ultimately, the lion's lack of cœur-age is also a heart condition as is Dorothy's desire to go home. The scarecrow is redeemed by his heart, not by his lack of brains, or acquisition thereof. Though the poem focuses on China and the nameless man from Tiananmen Square, the scenario plays itself every time we stand up for humanity over systems.
Posted by Steven Wittenberg Gordon, MD at 11:12 AM