Poem of the Day: “Herman, The Sturgeon” by Tricia Knoll, Frequent Contributor and Poet of the Week

My palms press against the thick glass wall
between me and Herman. I nudge in
next to three young girls with ponytails.
Herman glides, a profile of fossils. 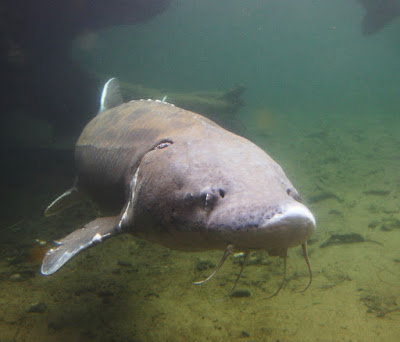 Does Herman see my hands splayed on the glass?
Am I as irrelevant to him as barnacles
crusted on the container ships on the Columbia
heading through Bonneville’s locks to Lewiston?
Does his brain sense how near his river is?
How high the wall to the upper Columbia?

I lean in as if to weigh the theft
of his wild identity, this land-locked fish.
Does he always swim clockwise?
Ignoring cycles of spawning?
His eyes give away nothing.
Bottom dweller. Four barbell sensors,
armored scutes. Yet – a brain that integrates.

My blessing to this fish
through my hands, through the glass.
Does he feel how my laying-on pulses the water?
Bless his terrible beauty.

Poet’s Notes:  I believe the Columbia River Gorge is one of the wonders of the world. I lament the loss of Celilo Falls and centuries of petroglyphs under Bonneville Dam. Other losses include robust fish migrations. Herman is a real fish (pictured), a humongous fish, incarcerated for his lifetime in a small pond at a hatchery as a tourist attraction.
Posted by Steven Wittenberg Gordon, MD at 3:53 PM