Poem of the Day: "Nick and the Candlestick" by Sylvia Plath, Poet of the Month 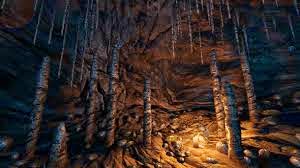 The poem is constructed of several three-line stanzas of free verse.  Some could be said to be formal tercets, as many pairs connect with each other by rhymes, near rhymes, or strong consonances--some, but not all.  Enjambment is used liberally between lines and stanzas.  The word choices are sometimes those of earth science or biology, sometimes gothic, and occasionally jarringly colloquial.

"Nick and the Candlestick" is a challenging poem to understand.  It reads like speculative (horror) fiction in places, like a love poem (love lost) in others, like a poem about pregnancy in others, and literally like a poem about spelunking in others.  The title is reminiscent of a nursery rhyme, except that "Nick," one of the names of the Devil, is substituted for "Jack."  And for a poem that promises to be about light (at least the light of a candle), the mood and imagery are dark.
Posted by Steven Wittenberg Gordon, MD at 7:19 PM