Poem of the Day: "Elm" by Sylvia Plath, Poet of the Month 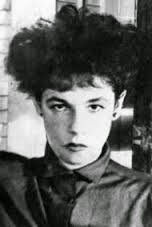 "Elm" is dedicated to the poet Ruth Fainlight (b. 1931) (pictured), who was a friend of Sylvia Plath's.  Although born in New York, she has lived in England almost all of her life.  In 2008, she became a Fellow of the Royal Society of Literature.  Reference to this and additional biographical information, as well as an audio recording of one of her poems, may be found here:  http://www.poetryarchive.org/poet/ruth-fainlight.

"Elm" is comprised of fourteen stanzas of three lines each.  They are not formal tercets; rather, each three-line stanza ends with a period and does not seem to relate to the stanza that follows, almost as though each is a stand-alone, haiku-like poem.  "Elm" is an enigmatic, difficult poem that appears to be about an elm but is probably metaphor for something, perhaps love, death, or homicidal tendencies.

The use of pronouns is particularly vague and confusing.  For example, in the first stanza, I, she, it, and you are used.  Who is I?  The tree?  The speaker?  Who is she? The tree again?  What is it?  The bottom?  A buttocks?  The tap root?  A penis?  Hell?  Who is you?  The reader?  The speaker?  Ruth Fainlight?  Some other third person?
Posted by Steven Wittenberg Gordon, MD at 2:44 PM