Review of Assume the Physician by John Hunt, MD

It’s Joseph Heller meets Samuel Shem in Assume the Physician, an extremely entertaining, sobering satire of about 100,000 words by John Hunt, MD.  The novel is available now in electronic format at Amazon.com.  I was privileged to read an advance copy. 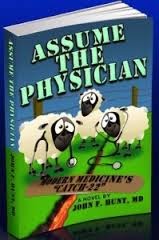 In Assume, a brash but naïve young medical intern, Dr. Eddie Markus, tries to make sense of the baffling, contradictory administrative realities that plague modern medicine.  He is guided through the mindless medical morass by his omniscient mentor, known simply as “Dr. Blow,” while receiving sympathy and support in other ways by the beautiful, idealistic Nurse Maid.

Dr. Hunt (pictured) knows firsthand the kind of obstacles that are constantly thrown in the way of good doctors by well meaning but nevertheless inherently evil government regulators and self-important administrators.  Every page of Assume will find the reader laughing at the inane antics and Catch-22 scenarios faced by Dr. Markus--that is, until the reality sinks in that every situation described is scrupulously based upon the actual medical environment of today.

The main theme of Assume is “doctors are sheep,” and it is about time that one of the sheep stood up and said so.  Doctors blame everybody and nobody, everything and anything for the healthcare crisis...except themselves, where the true blame lies.  As Dr. Hunt points out in his ironic, prophetic tale, if doctors would only stand up for themselves and, more importantly, their patients, the so-called crisis in healthcare could be solved almost overnight.

Dr. Hunt had the guts to write Assume the Physician.  I hope America and the rest of the world will have the guts to read it and heed it...before it is too late.