Poem of the Day: “Laura Belle” by Kaitlyn Frazier

Songs of Eretz Poetry Review is pleased to present “Laura Belle” by Kaitlyn Frazier. Ms. Frazier is a nineteen-year-old mother and sophomore at Northwest-Shoals Community College where she aspires to be an English major. She was born and raised in Florence, Alabama and graduated from Central High School. Her senior year, she was awarded an honorable mention in the North Alabama Renaissance Sonnet Writing Contest for her poem, ‘Old One,’ and this same poem was published in the Lauderdale County literary magazine Sweet Inspirations. In addition to twice before appearing in Songs of Eretz Poetry Review, Ms. Frazier’s work has been published in: Belle Reve Literary Journal, Belleville Park Pages, Corner Club Press, and Poetry Pacific.

Quickly, he ran through the forested vale,
Quickly on his way to meet his Laura Belle. 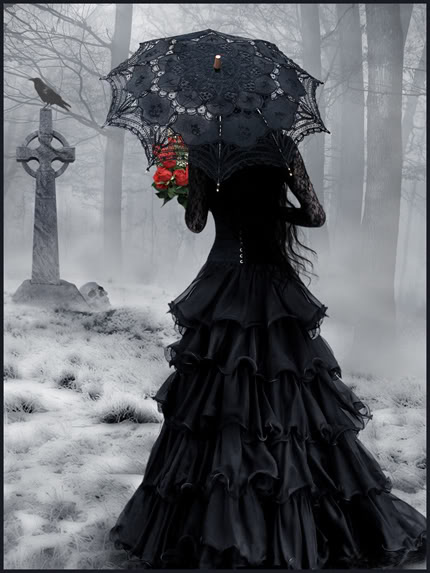 Quickly, he stumbled en route to his Belle,
Quickly, he often fell for his Laura Belle.

Merrily, she daydreamed of garlands of greens,
Merrily, twist’d in her tresses between.

Quickly, he faulter’d as to where he should lead,
Quickly, lead his Belle where to be freed.

Merrily, she sat idle with happiness to come,
Merrily, unaware of her love’s flighty run.

Quickly, the curs’ cries carried o’er the dale,
Quickly, his efforts at last stumbled and fell.

Slowly, but harshly his limbs were bound tight,
Slowly, he was pulled to feet upright.

Slowly, the hooves clomped from which he was led,
Slowly, he followed without a word said.

Slowly, he approached the jaws open wide,
Slowly, he looked upon his love and cried:

Dear, I am not whom ye thot me to be,
I am the product and bane of infamy.
For years I have courted gambling and guns,
‘tis why I found it high time to run.
Never did I mean to shame you,
For you were the reason my needed attempt,
To pay off my bounty and my sins repent.
Alas, now I am utterly lost,
And thy pain was the wretched cost.
Dear, Belle, I love thee so sweet,
And I’ll continue ‘til in heav’n we meet.

Sadly, she sank to her knees,
Sadly, she heeded her loves tender pleas.

Slowly, he followed suit with head asunder the blade,
Slowly, he studied her wrenched white face.

Sadly, she wept with lover’s remorse,
Sadly, she moaned for his soul’s bitter course.

Sadly, she keened with grief and despair,
Sadly, she vowed to follow him there.

Slowly, the sounding ring of the doleful kirk-knell,
Slowly, it followed his poor soul to hell.

Sadly, her soul was a victim of grief,
Sadly, her death was comforting and brief.

Poet’s Notes: Laura Belle was written during a period in which I was deeply immersed in an early Romantic poetry book, and, as Dr. Gordon correctly surmised, I was reading Wordsworth at the time. I was fascinated with the early ballads and how rhythmic and melodic they sounded when read aloud. I was also reading Thomas Hardy at the time; I am a huge fan of both his poems and novels with Tess of the d’Urbervilles being my all-time favorite.

When writing "Laura Belle", I was going for an anaphoric sort of poem as one might find in a sonnet written by Shakespeare, but I did not hesitate to swap a word that has a similar meaning or sound to avoid being boring or redundant. I noticed that Wordsworth, Hardy, and Shakespeare focused on the characters and also on the scenes and settings in which their characters interacted; I tried to incorporate their styles and techniques into my own.

Editor’s Note: This one does remind me of Wordsworth more than a little--a classic, epic poem about the lives of common men and women. I like the way that the poet did not insist on hard rhymes throughout, using assonance or consonance instead when choosing the right word called for it.
Posted by Steven Wittenberg Gordon, MD at 8:24 PM