Poem of the Day: “Black Feathers” by Loretta Diane Walker

Songs of Eretz Poetry Review is pleased to present “Black Feathers” by Loretta Diane Walker.  Ms. Walker is an elementary music teacher from Odessa, Texas.  She has taught at Reagan Academic Magnet for thirty-two years and was voted Teacher of the Year in 2001. She has a BME from Texas Tech University and an MA in Education from The University of Texas of the Permian Basin.  A two-time Pushcart nominee, Ms. Walker was elected as the 2014 “Statesman in the Arts” by the Odessa’s Heritage Council. 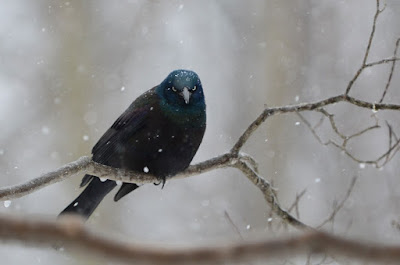 Winter has ripped away the pecan trees’ disguise
exposing every muscle and sinew,
blemish and crack,
vulnerable to the wind’s strong lust for power.
It could snap its wooden tendons with one heavy sigh.

And what of our vulnerability?
How we cling to anonymity, fear transparency,
for others to see us in our humanness,
or for things old and broken to surface, spill out
from behind walls of insecurity.

Once I told a secret.
I know the blow of rejection, the crush of words,
shame rising from my countenance
like steam from an iron.

On this winter’s dusk,
clouds make a gray skirt around the moon’s fat bottom.
Over the pecan trees’ bald head,
a wave of black feathers ripples
across a rain colored sky.
The cold’s icy knuckles brush my face—
batter grackles’ wings, flapping, squawking
as though their out of tune melody will heat the air.

My hands are two brown rafts floating
in the warmth of my pockets when I see them—
two teenagers talking with their thumbs,
pressing buttons on cell phones,
swift, staccato, sure like the rain,
their voices drowning.

Poet’s Notes: I love the naked, raw beauty of trees in the winter. Each branch is a sculpture of vulnerability--a testament there is strength in transparency.

I used to live across the street from our mall. One chilly and cloudy winter afternoon, I braved the weather and walked over to relieve myself from cabin fever. Grackles were extremely vocal this particular afternoon. It was as if they were warning me. In Odessa, a cloudy sky does not necessarily mean rain. However, during my walk over it started to pour. Inside, I walked behind two teenagers. They walked side-by-side texting rapidly. The whole while I was behind them, they did not look at or speak to each other.

Editor’s Note:  “Black Feathers” was first published in The Texas Poetry Calendar  in 2011.
Posted by Steven Wittenberg Gordon, MD at 10:25 AM