Poem of the Day: “Indian Paintbrushes" by Ron Wallace

Songs of Eretz Poetry Review is pleased to present another poem by Ron Wallace, “Indian Paintbrushes.”  A brief poet bio may be found here:  http://eretzsongs.blogspot.com/2015/10/poem-of-day-eastside-boys-we-ran-by-ron.html. 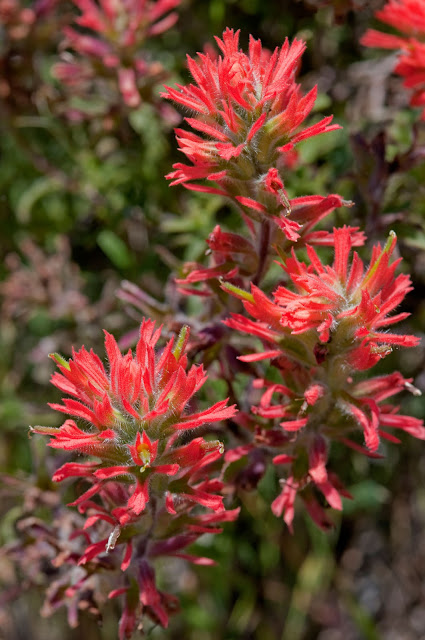 Flowers grow
flickers of orange fire
dancing on green fields under Oklahoma skies.
Like weeds
they hold to the worst terrain
and spread everywhere.

They beautify discarded Coors cans
and swarm beneath barbed wire
filling empty cattle pastures,
piercing coyote bones
taken by the grass
on land where, long ago,
Choctaw and Chickasaw hunted.

Once,
as a boy,
I worked the roots of a handful loose
from the rocky soil
across the gravel road,
running in front of my house
and brought them to my mother’s flower beds.

With all the care a ten year old could muster,
I replanted the fire
between the petunias and the four o’clocks.
But there
among the tame flowers
soon
they perished.

“They grow wild;
that’s just how some things are meant to be,”
Momma said
as she watered her carefully tended garden
in the summer heat of Oklahoma.

But always
without fail,
before she’d go back inside,
she would walk over to the edge of our yard
and look across the dusty road
at the fiery red-orange blanket,
burning in the last light of day.

Poet’s Notes:  "Indian Paintbrushes" was inspired by a true story. My mother deeply loved all flowers, the wild and the tame ones. As a boy, I actually did bring some Indian Paintbrush flowers from a field and attempt a transplant in her flower beds, and she did tell me some flowers are meant to be wild to soothe my disappointment when the flowers failed to grow there. It would be years later before I realized the universal wisdom of her words. I never see a field of those beautiful flowers that I don't think of her; for that matter I never see a flower growing anywhere that I don't think of her. She was a huge inspiration for me growing up. I think I was one of her "wild things" that she loved.

Editor’s Note:  I like the poet’s use of color here, as well as the wisdom of the speaker's mother.  The story of the little boy reminded me of my childhood--a nice bit of nostalgia. TJMF Publishing in Clarksville, Indiana published “Indian Paintbrushes” in a similar form in I Come from Cowboys in October 2008.
Posted by Steven Wittenberg Gordon, MD at 7:03 PM