Review of "Having Words" by Alfred Corn 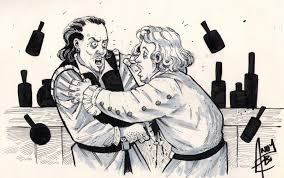 Having Words by Alfred Corn was offered by Poets.org's Poem-A-Day on July 3, 2013.  The poem appears to be about a brewing barroom brawl at first, but then veers into the territory of cricket sounds, pondering that names are just a form of noise.  By the poet's own admission, according to his notes, the poem might have ended up in the garbage, but I agree with his friends that it does not deserve such a fate.
Posted by Steven Wittenberg Gordon, MD at 5:21 PM