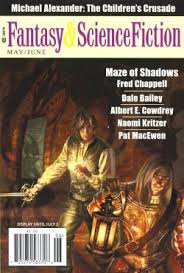 Maze of Shadows by Fred Chappell is the novella featured in the current (May/June 2012) issue of Fantasy and Science Fiction magazine.  The editor's note states that Mr. Chappell's tales of Falco the apprentice shadow master, of which Maze is the latest, began appearing in F&SF in 2007.

Maze is a well-written, entertaining swords and sorcery fantasy and mystery story all rolled into one, and the combo works beautifully, as I daresay it does in my short story "Nightmare in Xipan."  Interestingly, there are no discernable science fiction elements in the story, even though  F&SF states in its submission guidelines that having a sci-fi element, however small, is a requirement for publication in the magazine.

This was the first Falco story that I have ever read, and I am eager to read more of them.  Mr. Chappell's world is set in a kind of Italy during the Renaissance, but it is clearly a world other than our own.  In this world, shadows can be captured (or stolen--but don't call Falco a thief!) and used by shadow masters in various, interesting ways.  This makes for a unique scheme of magic--reason enough to open the book--but it was the cast of fascinating and mysterious characters that kept me turning the pages.
Posted by Steven Wittenberg Gordon, MD at 10:41 PM