Poem of the Day: “Wild Sorrell” by Carol Hamilton, Poet of the Month

Songs of Eretz Poetry Review is pleased to present “Wild Sorrell” by Carol Hamilton, Poet of the Month.  Ms. Hamilton will also be serving as the guest judge for the Songs of Eretz Poetry Award Contest, which will run from September 1 to October 15, 2015.  A detailed biography of Ms. Hamilton may be found here:  http://eretzsongs.blogspot.com/2015/08/songs-of-eretz-poetry-review-poet-of.html.  The contest guidelines may be previewed here:  http://eretzsongs.blogspot.com/p/songs-of-eretz.html. 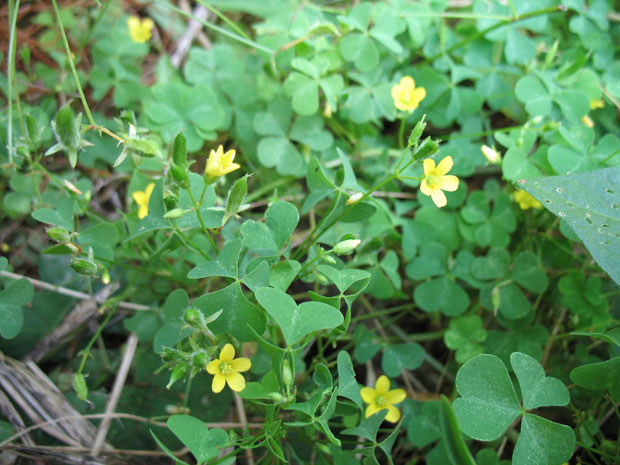 Loved weed of childhood,
eye tooth taste and tiny yellow
trumpet flower, clover-leafed,
now my enemy, the way it wraps
itself, winding around roots,
insinuates itself, a hanger on,
hides beneath desired
plants. But it did not hide then,
did not need to. No one
hunted it down as I do now.
Unwanted things turn crafty,
and I hate the way I’ve become
the watchdog of my world,
patrol my borders, snarl
at whatever dares disturb my plan,
a vague envisioned paradise
I have lost and keep chasing off
at every least encroachment.

Poet’s Notes:  “Wild Sorrell” speaks of the lost delights of childhood, a paradise lost in the pursuit of some hoped for paradise I might create myself. I feel a strong sensory response to the words “eye tooth taste.” It is sharp and lemony and sour.

Editor’s Note:  The difference between an herb and a weed is sometimes but its usefulness to man.  I enjoy the colorful weeds that grow on the medians and on the sides of the roads in Kansas, but rip out the same, albeit with mixed feelings, when they get into my herb garden.  “Wild Sorrell” was originally published in Ship of Fools.
Posted by Steven Wittenberg Gordon, MD at 3:58 PM