On behalf of Songs of Eretz Poetry Review, I wish to congratulate Marge Simon, who, along with co-author Mary Turzillo, recently won the Science Fiction Poetry Association's Elgin Award for the best speculative poetry collection of 2014 for Sweet Poison (Dark Renaissance Books 2014).  Simon is a frequent contributor to Songs of Eretz, and was our first Featured Poet (Songs of Eretz Poetry E-zine, Volume 1, Issue 3, January 2014).  A review of Sweet Poison appeared in Volume 1, Issue 4 of the e-zine and is below reprinted.
SWG 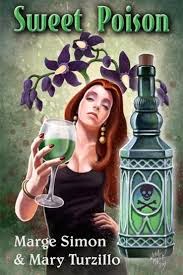 Sweet Poison is a collection of sixty speculative poems by the Bram Stoker Award-winning poet Marge Simon, and the Nebula Award-winning poet Mary Turzillo.  With the exception of one co-written piece, each poem by Simon was composed in response to a poem by Turzillo, or vice versa.  Neither will admit or cares to remember who started it.  The volume contains gorgeous illustrations by M. Wayne Miller and is available from Dark Renaissance Books.  Marge Simon was the featured poet in the January 2014 issue of Songs of Eretz.

The result of this collaborative back-and-forth is a series of poems that will profoundly affect the reader--alternatively wickedly delighting, strangely horrifying, surprisingly stimulating the intellect, or occasionally unpleasantly stirring the stomach.  Many poems provide interesting new twists on familiar mythologies; others will provide twisted new interest in unfamiliar mythologies.

Most of the poems tell stories.  Some might argue that they could be re-versed as prose poems or even presented as flash fiction.  However, were this to be done, the poems would lose the essential effects of the pauses between the lines--pauses that in their silence often scream.

Lovers of horror, the macabre, the bizarre, the burlesque, and the surreal are in for a real treat.  For best results, turn off the phone, turn down the lights, and turn up the fire before turning the pages of Sweet Poison.  And remember to lock the door.